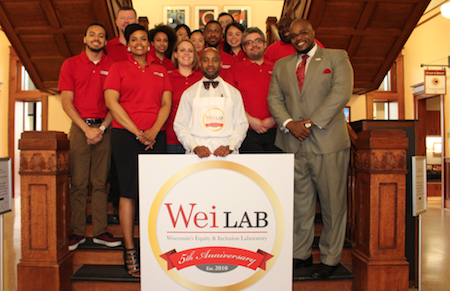 Dr. Jackson and his colleagues at the lab's 5th anniversary celebration.
“I feel that the role that Black academics have played in social movements and community building needs to be present again,” Jackson said.
Wisconsin’s Equity & Inclusion Laboratory recently celebrated its 5th anniversary.
This was an important milestone for all involved and in particular for its founder, director, and chief research scientist, Dr. Jerlando F.L. Jackson.
Thoughtful and deliberate, when Jackson speaks it’s with a quiet intensity that alternates between seriousness and a charming, low-key liveliness.
His work with the Wei LAB centers on creating ways to broaden participation and employee retention of underrepresented groups in careers within the fields of science, technology, engineering and mathematics as well as in higher education as a whole.
As a young man, Jackson dreamt of playing in the Boston Philharmonic or becoming a music professor. His pursuit of that career, however, was interrupted while he was on a nationwide tour as a member of Alabama’s Drum and Bugle Corps.
During that trip, an instructor mentioned that he was going back to get his Master’s degree in higher education. Curious, “[I] simply asked him to tell me more about this field and [I was] just captured by his description and said, ‘That’s exactly what I want to do,’” remembered Jackson.
He immediately sought out information on the topic from his academic advisor, who confirmed that the school had a program and that Jackson was qualified to enroll. He then enrolled in the higher education graduate program while finishing his last year of undergraduate work in music. “So that was the beginning for me and it has quite honestly been the best decision for me,” he said. 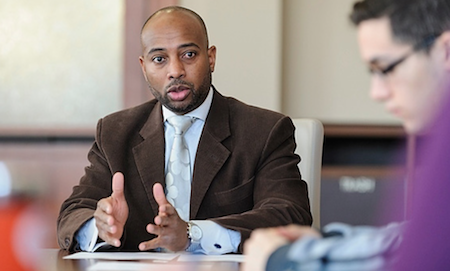