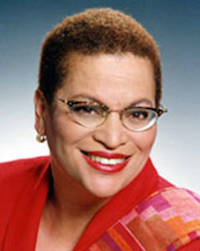 Above: Dr. Julianne Malveaux
Pundits are likely to spend the next several weeks attempting to explain the many reasons that Republicans simply kicked the Democrats square in the hind parts to dominate both houses of Congress in ways that had not been expected. With turnout at abysmal low – 33 percent – two thirds of the electorate didn’t think this election important enough to vote.   President Obama had it right when he said he heard them.
Many of those who cared enough didn’t have the opportunity to vote since voter suppression laws may have reduced the number of people willing to vote by 2.4 percent. The reduction of early voting days, the requirement of additional ID (in Kansas proof of citizenship could be requested), the elimination of same-day registration were among the tools Republican state legislatures used to suppress the vote, especially the African American vote. The tactic worked. Too many races were decided by minuscule margins, and laws that encouraged rather than discouraged voter participation might have made a difference.
In North Carolina, Senator Kay Hagan (D) lost by just 48,000 votes, or 1.7 percent of the vote, despite a robust Moral Monday movement that encouraged voter participation.  In Florida, the governor’s race was decided narrowly, and the current governor reduced the ways former felons had to restore their voting rights.
There were some cases were Republicans simply trounced Democrats – Mitch McConnell (R) handily won his race over Alison Lundergan, a refreshing female candidate who had support from the Clintons, among others.  In Maryland, the one-time front-runner, Lt. Governor Anthony Brown lost to Republican Larry Hogan, a businessman who hit hard on tax increases without offering a single idea about how he might pay for the programs he supported, and cut (as he promised) taxes and spending.
Too many Democratic Senators were elected on the Obama coattails in 2008, and chose to jog away from the president this election.  Instead of running away from the president, Democrats needed to embrace him. The economy has improved, and President Obama’s proposal to increase the minimum wage will help millions of low-wage workers.
Millions more Americans have health care since the Affordable Care Act was passed.  The Obama administration hasn’t tooted its own horn enough, and the Senators who have supported his work, even tepidly, ought to have been the ones to toot it.  Some, like Kay Hagan in North Carolina, ran from Obama because he wasn’t popular in their state. They lost anyway.  Imagine if Democrats were as united as Republicans in putting a message out there.
Noneconomic issues, such as ISIS and the handling of the Ebola virus presence in the United States, have been among the reasons President Obama’s popularity has plummeted. The fact that Democrats have yet to promote a strong, cohesive, economic justice agenda is another. You can’t sleep with Wall Street on one hand and talk about wage increases on another without showing that Wall Street and corporate America pay their fair share of taxes. When Democrats send mixed signals, the Democratic base is indifferent to a mid-term election and people stay home.
Republican dominance might not have the effect Republicans hope for it to have.  President Obama still has veto power. And Republicans have the opportunity to squander their legislative dominance, setting up the opportunity for a Democratic victory in 2016.  But this 2014 election ought to remind Democrats that the development of a progressive agenda, with fair pay, health care, quality education, and social and economic justice at its base, will result in an energized base in 2016.  It ought to remind Democrats that reliable allies aren’t so reliable anymore.  Dems lost traction among unmarried women and people under 30, so they have to have a plan to win them back.
Republicans tend to be consistent with their message, even if their message is devoid of real programmatic meaning.  They connected their Democratic opponents to President Obama so that those ambivalent about the president either stayed home or voted for Republican candidates. What Democrats failed to understand is that they couldn’t run away from the president and mobilize the base that supported him, and that part of their message had to be their support of successful economic programs?
No message, no votes, no victory.  That’s the lesson for 2016.
Julianne Malveaux is an author and economist in Washington, D.C.