By A. David Dahmer
Deltas Sigma Thetas host Voter Education & Registration Series
"A man without a vote is a man without protection."
—Lyndon B. Johnson
The Madison Alumnae Chapter of Delta Sigma Theta Sorority, Inc. is hosting a series of Voter Education and Registration events to make sure that people are politically informed and that they are exercising their right to vote.
“This is something that is very important to me both personally and professionally. I am just really concerned with the lack of information that is being disseminated —especially to communities of color,” says Jessica Strong, the chair of the Social Action Committee for the Deltas. “A lot of people just don’t know the basics of the electoral process. These events are really shaped around just giving people that basic information and also highlighting the changes from the Voter ID law that’s been reinstated.”
Strong and Angela Arrington, also on the Delta’s Social Action Committee, sat down with The Madison Times to talk about their latest Voter Education and Registration initiatives that kicked off Sept. 23 at Badger Rock Middle School with UW-Madison Professor David Canon talking about Voting/Election 101 and giving an overview of primary elections and impact of low voter turnout. Two more events are forthcoming. [See sidebar below right.] 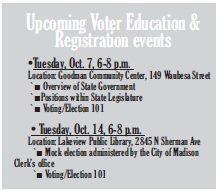 The Deltas have always been pretty active around voting doing an “Adopt a Poll” program and church-sight registrations. With election season heating up, the Deltas are working hard to invigorate people in the Madison community.  “I love the community involvement and the work on social issues that we do — this is my fourth year now on the Social Action Committee,” says
Arrington, who is also first vice president of the Delta chapter. “Our organization was founded with the mindset of socio-political involvement.  This committee hits on everything that we are about and political awareness and involvement is huge for us. I’ve really enjoyed being involved with this committee.”
“We want to make sure that we don’t disenfranchise folks — that we really make sure that they know that they have the right to vote, participate in democracy, and create change,” Strong says. “Carola Gaines, the president of the Madison Alumni Chapter [of Delta Sigma Theta sorority], believes the same thing and this will really make our chapter a vehicle to help people really learn about and being informed about voting.”
The Delta Sigma Theta sorority was, in fact, founded on the principles of social action surrounding voting.  “Our founders’ very first public act was participating in the woman’s suffrage march in 1913,” Arrington says.
In March of 1913, nearly six weeks after its founding, several Delta Sigma Theta  founders marched in the historic Suffragist March under the Delta Sigma Theta banner. Today, low voter turnout statistics highlight the need to continue to identify ways to include opportunities for all citizens to exercise their voting power. “This is what we do,” Strong says. “It’s a directive from our national president to carry out these types of events to make sure that people are engaged and informed, and, at the end of the day, to combat voter suppression.”
Under the auspices of the National Social Action Commission, Delta Sigma Theta continues to institute programs that advocate:
• The reauthorization of the Voting Rights Act.
• The repeal of voter disenfranchisement laws.
• The full restoration of voting rights for individuals who have paid their debt to society.
•The full implementation of the Help America Vote Act.
Strong emphasizes that Delta Sigma Theta is a non-partisan organization and is, therefore, non-political and can neither engage in partisan politics nor promote the candidacy of any person for public office. “We’re not here to promote any certain candidate or any certain party,” Strong says. “We just want to make sure you have the tools to vote and know all of the information.”
“Your vote is your voice,” Arrington adds. “Sometimes that might be the one avenue that you can really be heard because our votes are important. Every vote is to be counted. I truly believe in the spirit of democracy with the vote.  If you have concerns in your community at the local, state, or federal level, this is the opportunity to be heard.”
Voting (or lack of it) is especially consequential in minority communities. The conflict in Ferguson, Mo., that has captured the nation’s attention highlighted the fact that despite the city’s population being 67 percent African American, the mayor was white, five of the six council members were white, the police force was white, and many of the key political players were white.
“It’s all interconnected. In order to have political clout and to make ourselves be seen as serious contenders in creating change and really speaking up for communities of color, we have to participate in the electoral process,” Strong says. “We can’t sit back and be complacent with the leaders that we have locally, statewide, and federally. It’s all connected. When you talk about education, when you talk about health disparities, homelessness, poverty, jobs — it’s all connected to who we elect in office.”
The Deltas feel that it is absolutely imperative that community members are educated and informed about the electoral process.
“[Deltas] are always talking about voting awareness — not just around election time,” Arrington says. “We’re ramping it up and trying to do more so people can be educated and wanting to vote. We want people to be knowledgeable about everything about the whole voting process — how elections work, how ballots work, who’s on the ballot, etc. It’s an educational experience for us, too, as committee members. It’s not just for the public.”
“Our goals are to register as many people as we can to vote,” Strong adds. “We don’t have a number in mind. But we want to have an impact. We want people to be empowered and to not be intimidated by all of this legislation and all of the changes that are happening. We want them to be informed.”