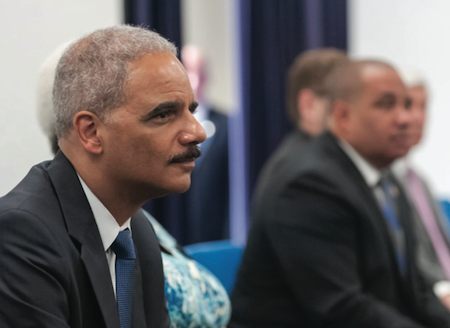 Attorney General Holder cited lack of U.S. data tracking use of force against and by police. Credit: Department of Justice
“Particularly in the Midwest, and then a little bit in the South, there really are hotbeds for police violence.”
WASHINGTON, D.C. (NNPA) — As Eric Holder ends his tenure as U.S. Attorney General, he’s making a point to address police violence. “The troubling reality is that we lack the ability right now to comprehensively track the number of incidents of either uses of force directed at police officers, or uses of force by police,” he said recently at a Martin Luther King Jr. Day event. “This strikes many – including me – as unacceptable.”
As it stands, both the Federal Bureau of Investigation and the Justice Department compile information on police-involved deaths, as reported by police departments themselves. But there are challenges with the reliability with this data. By law, collecting and providing this information to the government is mandatory only for police agencies that receive certain federal funds; police-involved deaths found to be unjustified are not included in the FBI’s measures; and reporting guidelines can vary from place to place, to name a few issues.
Over the past few years, citizens have created well-regarded and crowdsourced online databases such as KilledbyPolice.net, FatalEncounters.org and the U.S. Police Shootings Database (launched by Web sports blog Deadspin). MappingPoliceViolence.org is the newest addition to this effort. Mapping Police Violence builds on this tally by merging and cross-checking those first two databases. It compiles a month-by-month death toll for 2013 and 2014; and by combing through media reports and other public data, the contributors have confirmed the race of every victim in 2014. 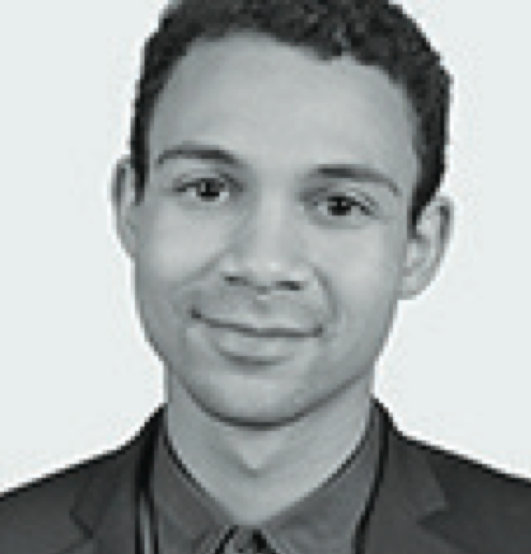 Sinyangwa, project director at MappingPoliceViolence.org, is among many trying to capture data on police violence. Credit: policylink.org
Samuel Sinyangwe, a 24-year-old Ferguson, Mo., protester and one of the project’s directors, said that this detail is missing for approximately 60 percent of the victims in the source databases.
Though the project highlights the disproportionate killing of Black people, it includes all reported deaths by date, location, race, age, gender, cause of death, and medical condition (e.g. under the influence, mentally disabled, etc.). Additionally, users can compare police departments around the country by population, murder rate, and how “likely to threaten Black life” they are.
“When you compare White folks and Black folks who were killed by police, there are big differences. White folks tended to be more likely to have a mental illness, to be armed, to be older … or to be drunk or under the influence. So they were more likely to have some condition that made it more challenging for police to deal with them,” said Sinyangwe.
“However, for Black folks, they were less likely to do all of these things, and then they were still more likely to be killed. You can only do that analysis if you looked at all races and were able to compare and contrast.”
By Mapping Police Violence’s count, police killed at least 1,175 people in 2014. Of these victims, 302 were Black – a disproportionate rate of 26 percent – and 56 percent of these Black victims were unarmed. Most victims were shot, but other causes of death included the use of a Taser, physical restraint, being hit by cars, and in one case in New York, falling from a window.
“What you can show quite plainly with this tool is that, in fact, places with the same amount of crime, the same demographics, have very different levels of police violence. So crime is not an excuse,” said Sinyangwe. “We’re hoping to really help [communities and organizers] make the case for why a given city or police department is really culpable for this and really needs to make a change.”
According to the data, Florida, Texas, and California had the highest number of Black victims last year (each responsible for about 20-35 deaths). Police departments responsible for the most deaths last year include the Chicago Police Department (13 killed), followed by Los Angeles and New York (10 each), and Prince George’s County Police Department in Maryland (five deaths).
Sinyangwe points out that for the city of St. Louis, if the current trend continues, Black males 27 and younger will have a statistically greater chance of being killed by police than dying in a car accident.
MappingPoliceViolence.org is run by Ferguson protesters and organizers, and is a project of the movement’s online hub, WetheProtesters.org. Volunteers around the country contribute to, sort and verify the information.
“Particularly in the Midwest, and then a little bit in the South, there really are hotbeds for police violence,” said Sinyangwe. “The question is, can we actually do something on a preventative end instead of waiting until a huge tragedy happens?”
Jazelle Hunt, a Washington correspondent for the National Newspaper Publishers Association News Service, recently completed week-long training at the University of Southern California as one of 14 journalists awarded a 2014 National Health Fellowship. Hunt is a Howard University graduate.