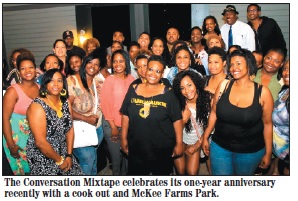 People just can’t seem to get off their laptops, tablets, i-Pads, and smartphones these days. Texting, Facebooking, Tweeting, Instagramming — the art of true conversation has been lost, people say.

“Social media has changed how people interact with each other and I think people too often lack the social skills that they need to have to solve problems,” says Sabrina Madison. “They haven’t had those natural face-to-face conversations that are so important.”

Madison’s Conversation Mixtape brings people together for some real old-fashioned face-to-face dialogue and interaction. The Mixtape will boldly tackle any topic — spousal cheating, child support issues, erectile dysfunction, interracial dating, health issues, finance issues, religion, how racial disparities affect the black family, and more. “We will talk about anything at the Conversation Mixtape,” Madison tells The Madison Times. “We talk about normal topics, but we also tackle taboo topics and we talk about them openly.” 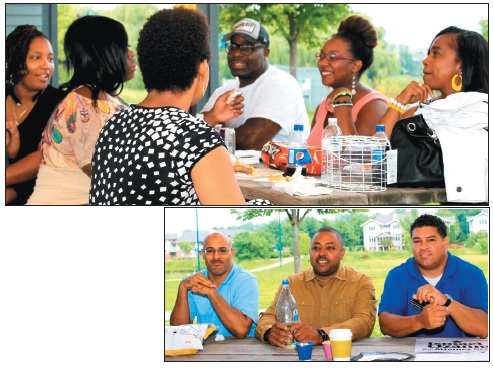 Madison, better known as "Heymiss Progress," is the founder and facilitator of The Conversation Mixtape. She is a motivational speaker, a poet, and an active community member. She is also an administrative specialist for the School of Health Education at Madison College.

Madison was on Facebook in July of last year hashing out a controversial topic online as people tend to do nowadays.  “We were talking about the mother/whore complex and this thread got to be 200-300 comments long. I’m like, ‘We’re not finding any kind of agreement here; let’s get together over some food and some drinks and just really talk about it,’” Madison remembers.
With that, the Conversation Mixtape — a discussion group for black men and women of all marital statuses designed to help them better understand one another and improve their relationships — was born.

“About 12-15 people showed up to that event that first night at my friend Kegan Carter’s house,” Madison says. “We were only supposed to be there until 10 or 11 p.m. We were there until 2 or 3 [a.m.] in the morning. What we realized was happening is that we were really breaking down these topics. We had a lot of fun with food and drinks and music, but it was also very orderly. It wasn’t disrespectful and it was appreciating all sides and all views of the debate.”

The feedback that Madison got was tremendous. “People kept sending me messages [saying], ‘I’ve never been in anything like this where we have black adults getting together and talking openly about such important issues,’” Madison remembers. “They wanted to do it again!”
It went so well that Madison planned another event. And another. And another. Attendance grew. Internet chatter about the Mixtape increased.  What started with 12-15 people soon became a huge event. Every month, Madison has to limit it to 40 people because they all need to squeeze into one house or venue and because she wants everybody to feel like they are part of the conversation.

who are like-minded because the city is very spread out with pockets of black folks here and there,” Madison says. “With the Conversation Mixtape, we have them all in one room and people feel comfortable speaking about anything.”

All social classes are welcome as Madison prides herself in the socioeconomic diversity of the event. That diversity was evident as the Conversation Mixtape recently hosted its one-year anniversary party at McKee Farms Park.

while Madison led the discussion. 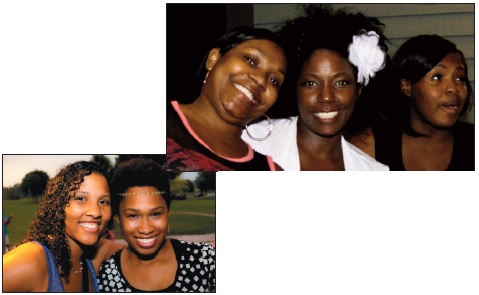 One important rule at the Conversation Mixtape: You have to have something in your hand in order to be able to talk.

Takeyla Benton (pictured above in polka-dots next to Marie Justice) was in attendance at the anniversary party. She's been one of the Conversation Mixtape regulars since the beginning. “I found out about it through Facebook and have been going regularly since the second or third meet-up," she says.

Benton says that at first it was a little unnerving sharing personal information with strangers. “Some people share a whole lot, too,” Benton smiles. “But you hear everybody’s story and you understand that the things that are discussed and the advice that is given are not malicious things; they are helpful things. It’s all coming from an honest place which is refreshing. People 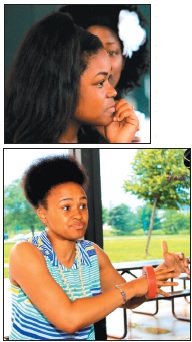 give you a view or opinion on things that you would not have thought about on your own. You get more and more comfortable on

ce you come to understand that this is a safe place to talk about things.

“I like Facebook, but it’s much better when you are in person … face-to-face,” Benton adds. “For example, if you are really emotional about something and you want to get an opinion, people will actually sit and comfort you and pull you to the side and talk to you. They will show genuine concern. It can be a little shocking to see such great support from people who have just met [each other] probably for the first time.”
Benton says that the Conversation Mixtape has helped her personally quite a bit.

“I’ve been in a relationship for over 12 years and it has helped me with that,” she says. “People will say things to me that are completely real and I’ve learned quite a bit about how men think that I never would have known. It gives me more understanding and makes me think of things from the man’s point of view so I can approach the situation with a better frame of mind.”

“From day one, we’ve had more women, of course, come out than black men,” Madison says. “Out of 40-45 people, we’ll get about 15 men. I always have an RSVP list so I know who’s coming and we’ll always try to have men.

As the Mixtape becomes more popular, Madison is getting many requests to include other races and ethnicities and to expand the whole process.  Madison plans on hosting a few big “open” events where everybody is invited throughout the year and also is planning on doing Webisodes. “If we have 75 people, it will change the conversation,” she says. “Not everybody is going to have a chance to respond. So I’m weary of it getting too big.” 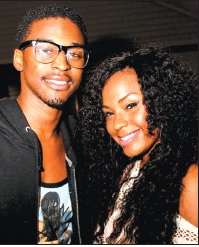 So, for now, the regular monthly Conversation Mixtape will remain a gathering with 40 people or less and with all-black participants. “People are happy with the format that we have right now and they are actually able to walk away from the event solving some of their own problems,” Madison says. “I don’t know if it got too big that they would still be able to get that. I don’t think so.

“People want me to do two or three of these a month but I have to remind them that I have a full-time job and a child,” Madison adds with a laugh.

Moving forward, Madison has a specific goal of always bringing new people out to the Conversation Mixtape.  “I want to keep getting the word out to new people so it’s not always the same crowd,” Madison says.  “My goal is to always keep the Conversation Mixtape fresh and new and to make a conscious effort to involve black men. I just always want to keep my ear open to the streets and pay great attention to what people are going through in life.

“I didn’t plan for any of this. It was just spontaneous. A chance for people to speak openly,” she continues. “Considering everything that the black family is going through right now, if we can just start to solve some of this B.S. that we’re putting on each other and going through ourselves, we can start to solve some of these larger issues. If we’re not tackling it together, we’re not solving any problems. We have more power, too, when we come together.

“For me, the basis of this all is love,” Madison adds. “And one of the things that is too-often lacking in the black family right now is love.” 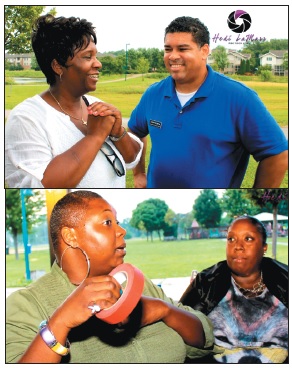 For more information about the Conversation Mixtape, visit   www.theconversationmixtape.wordpress.com