By Anita J. Martin, TMT Contributing Writer
(Part 2 of 2)
It was a sold-out event, as author Queen Afua spoke Sept. 20 at the Alliant Energy Center and got the exhibition hall energized. The well-known author and wellness business owner from Brooklyn, New York, was keynote speaker, addressing 400 folks at Black Women’s Wellness Day.
Lisa Peyton-Caire, founder of the Foundation for Black Women’s Wellness, said she had first read about liberation through purification when she was 18. Peyton-Caire referred to Queen Afua’s book, “Woman Heal Thyself” as a “life-changing read that penetrates your heart and soul.” During the last 40 years, the natural health practitioner has educated thousands using simple tools that “transform you,” she said.
Queen Afua addressed the group, stating that it was “a really auspicious day” for her, and shared her story with the mostly female audience.
“My mother fell sick at 64 years young,” she explained. “Her mind left, her body left…” When her brothers brought her back into the kitchen, despondent and not knowing what to do to help their mom, Afua said, her mother whispered to her in a barely audible voice, “‘Help me! Will you help me?’” That spurred Afua on to create Green Life Formula, which she stated strengthened her mom back to health.
Now 90 years old, her mother was recently hospitalized but successfully recovered.  “She’s not on death’s door anymore,” Afua said. “My mother told me, at 90, that she wants to love another 10 years, she said.
Afua said she snuck into the hospital wearing her white lab coat and gave her mom the green formula as well as other natural health remedies. “It got her walking,” the author detailed to the audience. “She got her life back.”
According to Afua, “you’re the keeper of health in your house,” and you can help your mother, father, children, and husband by creating a paradigm shift and using “your life as a living example of wellness.
The internationally renowned speaker indicated that from age seven to 16, she was a “diseased child” with lung problems and asthma. She also reported that as teenager, she had womb health issues with heavy bleeding, and also suffered from headaches.
Afua attests that 45 years ago at the age of 16, her life took a change for the better when she decided, “today is the day I heal myself.” She then invited everyone at the event to repeat these words and to ponder on this approach.
Afua continued to lead the group in positive affirmations: “I am indestructible.” “I am healed.” “I am whole.” “I am dynamic.” “I am powerful.” “I am the woman who lightens the darkness.” “I have overcome destroyers.” “I am there for those who weep.” “I am woman!”
Out of the box
Afua said when Peyton-Caire called to ask whether she could speak at the conference, she told Afua, “‘we chose you because you’re out (outside) of the box.’”
Giving that a bit more thought, Afua said she decided to incorporate the box theme into her comments. Upon further reflection, she thought it would be beneficial to bring a box and use it as part of her presentation.
“Who put you in that box? Is it that your father’s dreams are in that box?” That box, she went on to say, represents being wounded as a child, short-sightedness, pain, chronic pain, endometriosis, small thinking, a heavy heart, guilt, and shame.
“But the box is somebody else’s life, not yours,” Afua declared. “Are you ready to get free?” she inquired, mentioning the plentiful greens and nutrients so you can let go of that hurt that is inside. “That box may be in your heart. Open up your heart and be free. Let go of all the people that offended you in 1954. And (then) something else happened in 2005 and you got mad again…”
Afua stated, “When your heart is heavy, you overeat”—and then there’s eating because you’re lonely, sad, etc., not because you’re hungry. It’s time to get on the freedom trail, she indicated, describing how “when you get a light heart, you get a happy spirit.” She attributes heart disease and strokes to having a heavy heart, and indicates that suicide is about having a heavy heart.
Today, you’re going to get your freedom papers,” she asserted. “What have you done for yourself lately?”
Afua paraphrased a pearl of wisdom passed down from the ancestors of yesteryear:  “Our hearts must become as light as a feather.”  If there’s a person weighing heavy on your heart, she advises, “Give them the freedom to leave your body.” To her, every person you encounter is a teacher and every lesson is a blessing.
Choosing freedom
The wellness practitioner indicated, “Sometimes you want to run from yourself,” sharing the 13 petals of freedom, which include the ability to stand up for yourself, honesty, and healthy relationships.
“I am a woman who has the ability to help other women and men to get out of their box, because I am a free woman. “When you get free, don’t let nobody put you in that box again, because your family is dependent on your freedom,” implored Afua, referring to the woman as the centerpiece of the home.
Afua emphasized that how paramount it is to choose life: “Speak words of power. Eat foods that heal. Eat foods that grow in the ground. Choose life. Detoxify your relationships.  Step inside yourself, your healer. Go within to heal yourself…. It’s in the plants. It’s in the sunshine…”
She affirmed, “The power to heal is within me…whatsoever it may be, everything I need is within me because I have the power, the mighty power. The heal myself.”
Afua announced that this is the appointed hour, and invited folks to take the journey with her. “We all have an anointing,” she indicated. “This is no play-play…is today your day?”
For details regarding Queen Afua’s plant based wellness formulas, which she indicated have been tested by Dr. Bernadette Sheridan, M.D. of Grace Family Practice, see www.queenafua.com or call (718) 221-4325. 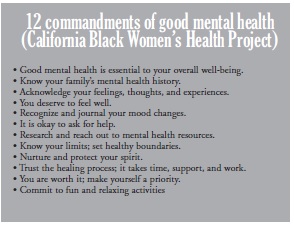