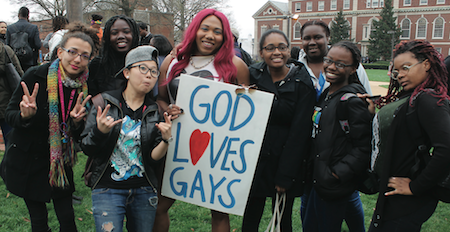 Rachel Kersey is Special to NNPA from Howard University News Service.
Westboro Baptist Church, the infamous unaffiliated church known for its hateful, unorthodox protests, especially against homosexuality, brought its hate speech to Howard University – and the university’s students and staff fought back.
Armed with picket signs, the organization, which has been denounced by the two largest Baptist denominations, Friday, April 10, gathered on 6th Street on Howard’s campus to denounce OUTlaw, Howard University School of Law’s organization for lesbians, gays, bisexuals, and transgender and queer students.
“AMERICA IS DOOMED,” “MOURN FOR YOUR SINS” and “GOD H8S FAG MARRIAGE,” the signs read. One sign featured a depiction of anal sex.
“It is a shameful sight to see the way that these young people behave, and the parents teachers and preachers have done that to them,” the church said on its website in explaining why it came to Howard. “They have no chance when they stand before the Great White throne on Judgment Day. We come in hopes that one little lamb is out there and may be called to repentance by the Lord their God.”
Howard students met the signs with their own. Dressed in all black or rainbow colors, the students held signs that read “HOWARD <3s OUR LGBTQ,” “ALL BLACK LOVE MATTERS” and “GOD LOVES EVERYONE.”
Nearly 100 students gathered at the flagpole and marched to the corner of 6th Street and Howard Place, where they promptly turned their backs on Westboro.

With fists raised in defiance, the sea of students sang “Lift Every Voice and Sing,” and more than one student shed a few tears. Only 20 minutes after starting, Westboro headed down the hill to the taunts of Howard students, who turned around to send them on their way.
“I thought it was perfect,” said Nia Johnson, a junior economics major. “I definitely felt the love and I felt proud. I was actually happy it ended early. Our power showed them that it wasn’t worth it here.”
Amber Mason, president of OUTlaw, agreed.
“This sort of hate filled rhetoric is not condoned on our campus, and we want to show them that through a show of solidarity,” Mason said.
“That’s now how we think here at Howard. We are inclusive, we’re accepting and their kind of speaking and behavior will not be condoned.”
Lydia Durfler, the organizer of the student protest, said she did so because LGBT community at Howard is often slighted.
“I don’t think it gets enough outright support from the Howard community, especially where the administration and faculty is concerned,” said Durfler, a senior political science major and an Amnesty International intern.
“And if we had a group on campus saying derogatory things about black folk and we weren’t doing something to build ourselves up in the midst of that, that would seem pretty crazy. The same goes for the LGBTQ community.”
Joshua Narcisse, president of the Chapel Assistants, an interfaith organization with Howard’s Andrew Rankin Memorial Chapel, said his organization stands against Westboro Baptist Church.
“One of the dominant themes in Christianity is love,” Narcisse said. “So, at the end of the day, whether it be Christianity, Islam, Hinduism or Buddhism, this love or respect for humanity is at the center of the work that the chapel does. And this is really just a part of us affirming that.”
Tyleah Hawkins, a senior broadcast journalism major, also objected to Westboro’s belief and its tactics.
“I’m a Christian, but I’ve always been an advocate for gay rights,” Hawkins said. “I don’t agree with preaching hate. I am a proud Christian. I love Jesus . . . and I feel like Jesus would be out here protesting with me.”
In the end, the protest – both sides – was one chapter of the rich social and political saga of the university, and there is undoubtedly more to follow,” said the Rev. Bernard Richardson, dean of the Andrew Rankin Memorial Chapel.
“This is Howard University,” Richardson said. “Protests and all the other things are what happen here at Howard. It’s part of our legacy. It’s part of our history.”