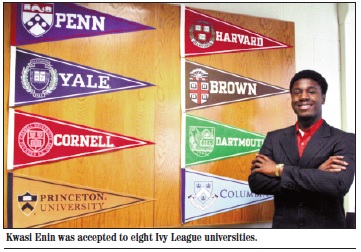 You would think that news of a high school student from a family of African immigrants getting accepted into all eight Ivy League universities would be met with universal celebration. If you thought that, think again.
First the news:
In the next month, Kwasi Enin must make a tough decision: Which of the eight Ivy League universities should he attend this fall?
A first-generation American from Shirley, N.Y., the 17-year-old violist and aspiring physician applied to all eight, from Brown to Yale.
The responses began rolling in over the past few months, and by late last week when he opened an e-mail from Harvard, he found he’d been accepted to every one. School district officials provided scanned copies of acceptance letters from all eight Monday. Yale confirmed that it was holding a spot for Enin.
The feat is extremely rare, say college counselors — few students even apply to all eight, because each seeks different qualities in their freshman class. Almost none are invited to attend them all.
The Ivy League colleges are among the nation’s most elite.
Comments posted on the news website reddit leave little doubt that even with all of Enin’s accomplishments, many people will never see beyond his race. The comments show appalling ignorance not only about race in the United States, but about the college admission process itself.
A person with the sign-in name of Hairlesswalkingchimp wrote, “I’m gonna get real with you reddit; no matter how pissed this makes you it doesn’t change the fact that he would not have had this absurd success if he was a white kid.”
A writer identifying himself as Jetusan asked, “Are you just as pissed that 30 percent of admissions at Harvard are legacies? How many are less qualified white people, I wonder?”
That’s a point most critics miss. Universities, including Harvard and Yale, admit a certain number of students in each class based on whether a parent attended the Ivy League institution. They call them “Legacy Admissions” and that’s how George W. Bush got admitted into Yale, following in the footsteps of his father and his father’s father. Other students are admitted because a parent made a major donation to the university.
“I am surprised that no one has mentioned that for the seven other schools he chooses not to attend, 7 students will be chosen from the schools respective wait list, and let’s be realistic, odds are they are white.”
Overlooked in some of the posts is the fact that college admissions deans try to construct a balanced class, not robotically picking applicants based on grades and SAT scores.
“Ivy Leagues don’t want well rounded applicants, they want a well rounded class,” wrote house_music_420. “It’s much easier to get in if you do something out of the ordinary and are really good at it instead of being pretty good at many things. I’ve talked to college admissions people and they all say that they are trying to build a well rounded class.
“For example 10 people from my high school applied to Stanford and the only one who got in had a 3.5 GPA (lowest of the 10) and a 2030 SAT (lowest of the 10) and he was in my class struggling mightily.”
Comeonreally8 wrote, “I am an admissions interviewer for one of the top ivies and I see a HUGE number of minority applicants with top grades, great SATs, and great leadership in their extracurriculars and they are rejected just as often as the non-minority applicants. So everyone saying ‘OMG IT’S ONLY BECAUSE HE’S BLACK’ calm down, being a minority is not some free pass to get into college. It is still incredibly challenging and rare to get into the top ivies. This kid sounds brilliant and I wish him all the success.”
Wrote retop56: “This comment section is nothing short of hilarious. Yes, schools look for diversity in admissions, but it seems like a lot of people really think he did nothing except check a box that he’s black and waltz into 8 Ivys.”
One person wrote, “There are 1000s of spots for white students to get in but when they fail to do so, they blame it on the 50 black students that they let in every year.”
A White writer, JadeChaosTheory, noted: “Just by being white we have a ton of advantages in general – minorities need the boosts where they can get it.”
He explained, “He [Enin] could graduate college with flying colors and still struggle to find a job/move up in the workplace because casual racism is a real and prevalent thing and there is an innate fear of people of color in positions of power.”

George E. Curry, former editor-in-chief of Emerge magazine, is editor-in-chief of the National Newspaper Publishers Association News Service (NNPA.) He is a keynote speaker, moderator, and media coach. Curry can be reached through his Web site, www.georgecurry.com. You can also follow him at www.twitter.com/currygeorge and George E. Curry Fan Page on Facebook.